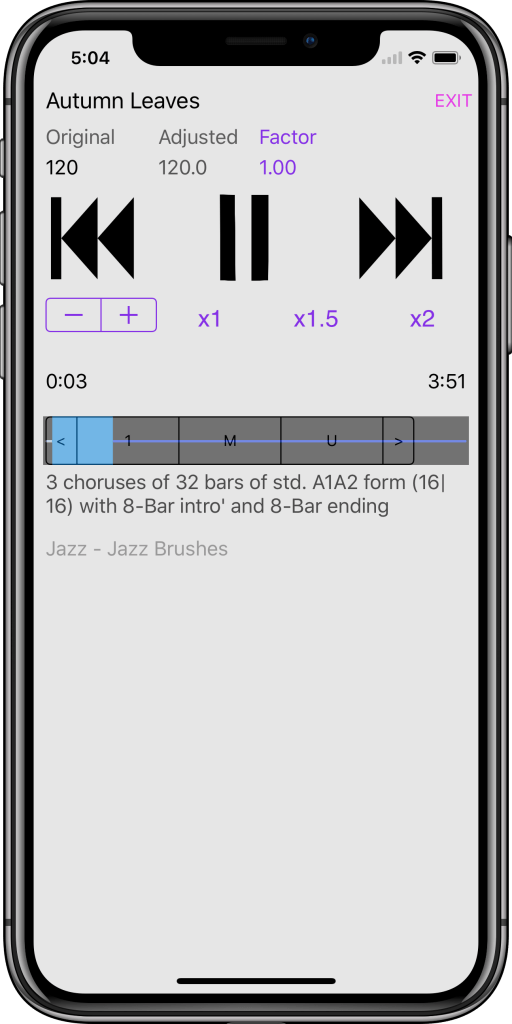 Song Rhythm Tracks are a new type of backing track composed entirely of rhythmic backing (no melody or harmony) arranged to the musical form of the song a.k.a. it’s “Song Form”. (Song Form refers to Alive Drumming’s view of a song’s form, taken from a drummer’s perspective of the compositional structure of a song. In addition to adopting names for common forms such as 12-bar blues, Alive Drumming introduces their alternative stick notation to describe a song’s form.)

These tracks are complete performances similar to what we expect from a professional drummer. They have a count-in, introduction section, multiple choruses and characteristic endings, all framed with the fills to delineate the start and end of musical sections. The mobile product design emphasises providing this level of arrangement without a typical arranger’s interface thereby keeping the interface simple. One can select a track in under 30 seconds, and under 15 seconds once you get the hang of it.

The App includes a player with some precise tempo variation and a basic setlist facility to sequence the tracks for your gig or jam session. It’s targeted to musicians of all abilities. For new musicians, the App easily provides an accompaniment to songs with a rhythm that’s sympathetic to the song so that they learn to keep time right from the start and benefit from engaging and inspiring rhythms. Gigging musicians can catalogue and play these rhythmic backing tracks in a performance context. Having quality rhythmic backing with a setlist facility and a musician’s player, all in the one App is so convenient one finds oneself using rhythmic backing more and more.

A “Musician’s Player”: what’s that? One that automatically dims the screen, will play in the background, has good-sized buttons and allows you to change the volume with the device’s physical buttons. Yes, all of that, but this player also displays the musical form of the track such as “4 choruses of 32 bars of std. AABA form (8|8/8|8) with no intro’ and 4-Bar ending”, and provides visual tracking against this as it plays.  This is just the information musicians want right before they are about to play a track.  So, if they start to lose their place a bit, a quick glance at the display will likely get them back “on track” again.

There’s a huge number of rhythms to select from (in the thousands) and endless musical forms for your songs. Once requested, the download can take a few minutes to arrive before it’s on your device for playing.  Alive Drumming grants the user rights to remix the track so they can transfer it to a computer using iTunes file sharing and then include it into their own compositions and album releases.

1. Selection Over Sequencing:   The choice of selecting the song’s form by name, or alternatively by using stick notation, over providing a sequencing interface is an innovation that hasn’t been seen before and one that gives this App its character.  It means that the musician needs to know the musical form of the song, which they must do even if they don’t realise it? The musician might not be familiar with the naming scheme being used but the App, when using a SongForm name, also provides a description with the stick-notation, so when one selects, “32-bar AABA”, it gets displayed as “32 bars of std. AABA form (8|8/8|8)”. There’s plenty of resources on Alive Drumming’s website on SongForm. In fact, SongForm names do not have to be used at all, one can also select “8|8/8|8” and get the same description displayed, “32 bars of std. AABA form (8|8/8|8)”.   The App provides a flexible facility for musician’s own definition of a song’s form using “stick notation”, e.g. “8|8/8|8”, allowing for highly complex user-defined forms.  Additionally, the App also includes a “Song name –> SongForm” sharing engine, so if your song has had its SongForm shared before you will be able to use it by pressing the magnifying glass search button after entering its name.

2. A focus on complete, production-ready tracks rather than drum loops:  Alive drumming doesn’t provide a sequencing interface, so there are no drum loops. Instead, there is a simple selection interface to specify (i) the song’s form and (ii) the rhythm. This keeps the interface clean.  It’s either a complete track from count-in through to ending or nothing at all. Looping isn’t even provided in the player interface.  it’s clear that all the way this App is about performing to high-quality, complete, production-ready tracks.  It’s for professional musicians and discerning amateurs.  It’s not a toy, but it did give us the most fun we’ve had in a long time.

3. It’s a client-server solution:  Alive Drumming’s back-end servers do the sequencing and audio production delivering the completed track to the mobile device. This is not the approach taken by other Apps that benefit from everything being within the App, either using their own loops or using iOS’ general midi sounds. This means Alive Drumming’s solution has the user waiting for the download to complete, but this does allow for higher-quality and greater selection of audio tracks from the server.

4. A performing musician-friendly interface from selection to performance:  Finally, the whole user-experience is “performance-friendly” adopting standard iOS features such as tables and pickers rather than esoteric design and sequencing interfaces. It’s been designed by musicians for musicians and is simple to use. Having straightforward interfaces to specify a track is important to musicians. They are playing new tracks all the time and don’t want to be wasting playing-time sequencing drum loops – so much so that I suspect the vast majority of musicians never do sequence drum loops – it’s too much effort and often too little reward.  However, taking 15 secs to specify your next track is a totally different prospect.

It’s the same with the player.  Again, it’s important to musicians, whether performing or practising, that the player is easy to use – read large buttons – and having the sectional structure of the track displayed instead of an album cover is much more useful. Finally, musicians need setlist facilities integrated with the player. They need to be able to order their tracks, easily adding and removing tracks across multiple set-lists. These are core features that differentiate a musician’s needs to that of music listeners. All these aspects combined make this App dead easy for musicians to prepare, practice and perform setlists of these tracks.

How do Song Rhythm Tracks compare with the competition?

This is a very new type of App but there are comparisons to Song Rhythm Tracks.

(i) Similar High Quality, More Flexibility, Higher Price, Less Convenience:  Procuring and learning sophisticated workstation tooling for professional musicians to create high-quality backing music. This has similar great audio quality with undoubtedly more features and flexibility but will take considerably more time, say around 30 minutes, to create a new track using sequencing software, render it to audio, tag that audio and transferring it to a mobile device for practising, playing or performing using standard music players such as Apple’s ‘Music’ App.  You gain in compositional features and flexibility but lose out on convenience – particularly in the setlists and player.

(ii) Less Quality,  Lower Price, Different Convenience:  Adopting Mobile Drumming Apps.  There’s quite a variety of Drumming Apps with a lot of variety as to features and facilities. They are generally less expensive but don’t’ deliver in the same way. Here are those which are closer to the SongForm Rhythm Tracks use-case:

Session Band Drums:  This App aims at a similar proposition – good quality drum backing with a mobile interface, but I feel it falls short in delivering both (i) truly high-quality rhythmic backing music and (ii) a convenient interface.  The user interface is based on visual sequencing, specific to the task.  This is an improvement to having to use a workstation based sequencer and transferring to the mobile device but I suspect is still too complicated and therefore would still be a barrier to entry for a lot of musicians.  It definitely is more cumbersome and slower to use than Song Rhythm Tracks.    Also, there is no real setlist facility and, as mentioned, I don’t think it delivers enough on engaging, realistic drumming.  It is though considerably less expensive that Song Rhythm Tracks with lower initial cost and no limit to the tracks you can sequence.

iRealPro: This is a deservedly popular App,  although probably not ordinarily considered in terms of rhythm-only backing music.   It does a great job of managing setlists, has a user-contributed library of tunes which often means preparing for a tune is very efficient.  Its strength is in getting a full accompaniment (rhythm and harmony) to well-known tunes complete with an on-screen lead-sheet of that tune being tracked as the song progresses.  It probably is based on midi-technology and provides good facilities to balance the mix.  This mix can be adjusted to have the rhythm part only.

iRealPro has good quality for its price but there are not many rhythms to choose from. There’s the rub.   Again, the quality isn’t really there in the audio.  It’s impressive on first encountering it but after a while hearing the same loops over and over loses the lustre. This is particularly true if only playing rhythmic accompaniment rather than a full ‘combo’ as it sounds more impressive at a complete mix than rhythm-only tracks.  Why is this rhythmic audio lacking compared to Song Rhythm Tracks?   iRealPro is an App with a limited collection of audio loops.  I don’t hear different loops being used for different tempos of the same rhythm.  I don’t hear the human variation that makes drumming come alive and I don’t hear truly great drumming as one does with Song Rhythm Tracks. iRealPro has a great following for an inexpensive tool to assist learning new tunes; Song Rhythm Tracks really plays in a different market. It’s more about the enjoyment of playing to a large variety of high-quality rhythmic accompaniment than learning tunes.

There are other mobile-based Apps but nothing significantly new when considering high-quality rhythmic backing with a convenient interface.  Songster is a competitor of iRealPro with a slightly different market and similar results.   There are other drumming specific Apps but they all fall down in terms of supplying the realism,  excitement and breadth of Song Rhythm Tracks which achieves this quality by being server-based.  What’s served is complete high-quality tracks already optimally sequenced and audio-engineered before being delivered to the end-user.   No sequencing or audio engineering occurs on the mobile App, it simply selects, requests and plays the tracks.

Song Rhythm Tracks is a class act for truly high-quality rhythmic backing.  You are not going to get tired of these backing tracks.  You are not going to have to sequence anything.  You’ll find that the player and setlist’s user-interface encourages the use of the App.  You’ll get to appreciate the form of your songs more and you just might include these tracks into your own single and album releases.   Don’t be put off by previous experiences with mobile drumming Apps.  This is something different.

Whether you are learning a new tune, jamming, gigging or cutting your latest album, this App provides a solution.

To check out samples of the audio take a look at Alive Drumming’s Samples page at https://alive-drumming.org/sample-audio-files/

For an interesting backstory of Song Rhythm Tracks check out the post, “The Primacy of Rhythm in popular music and practice” at https://alive-drumming.org/the-primacy-of-rhythm-in-popular-music/

Download the App on the Apple App Store at https://itunes.apple.com/us/app/songform-rhythm-tracks/id1254346877?ls=1&mt=8